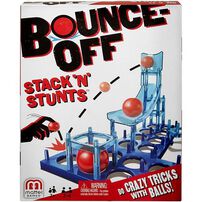 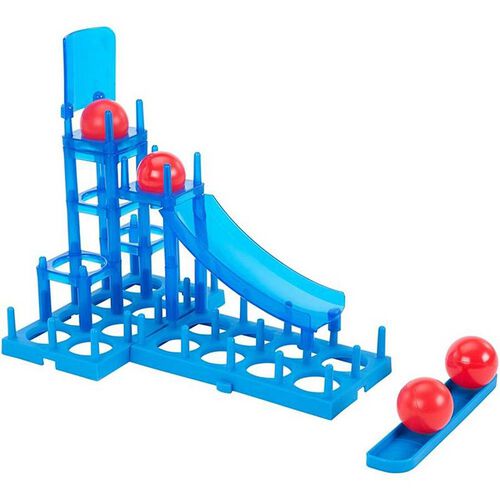 ages: 3+ years
RM41.50
share
The link to Bounce Off Stack 'N' Stunts has been copied

What a cool twist on a family favorite game! In BOUNCE-OFF™, you have to use a steady hand to bounce your way into matching the design on the card. With BOUNCE-OFF Stack ‘N’ Stunts™, game play is like that of H-O-R-S-E, the infamous trick-shot game. But this game uses a changeable BOUNCE-OFF™ tray! Use your imagination to rearrange parts of the game surface to create trickier and trickier trick shots for your opponents to hit. But just as in H-O-R-S-E, you have to hit the shot first—so both you and your opponent face the challenge! If a player can’t make the shot that an opponent set up and hit, that player earns a “B,” then an “O” and on and on until somebody spells B-O-U-N-C-E and loses the round! Includes 2 boards, 4 balls with one tray to hold them, game cards, and 10 accessories to create countless trick shots!

Have a blast with BOUNCE-OFF Stack ‘N’ Stunts™, a game of skill, luck, and challenging trick shots!
Played like H-O-R-S-E, but with balls on a BOUNCE-OFF Stack ‘N’ Stunts™ game board. You set up trick shots, and your opponent has to hit them.
If your opponent sets up a shot and makes it but then you miss that same shot, you get a "B." The round keeps going until someone gets B-O-U-N-C-E!
Ten game accessories let you change the board into countless new designs, so you can build the craziest of trick shots!
Endless fun because the game is challenging and always changing!