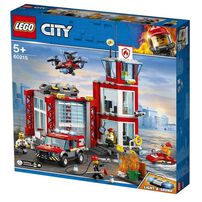 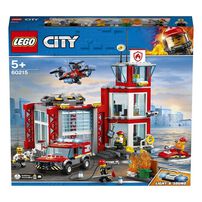 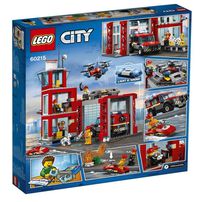 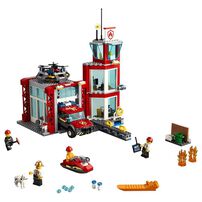 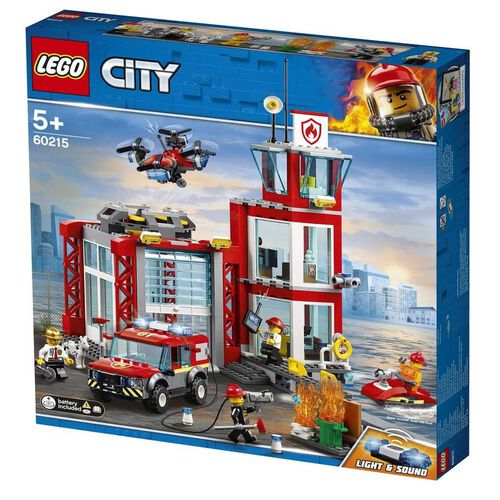 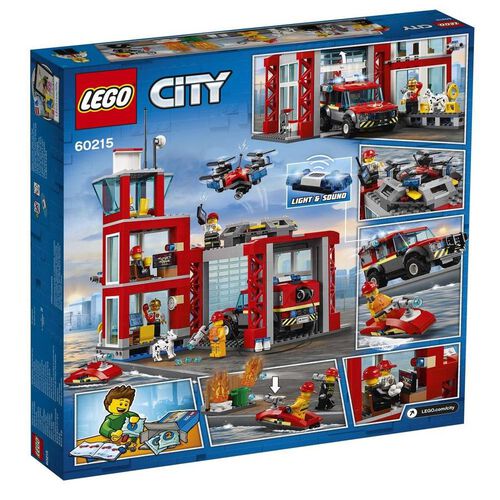 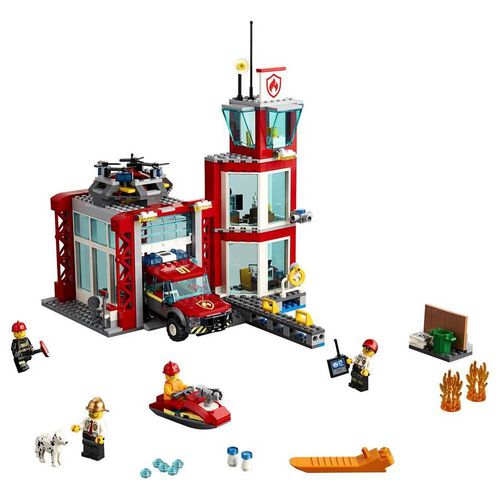 Show your child what life is like in a busy Fire Station!

Relax with your fire department mates from the Fire Station! Grab a cup of coffee while you hang out with the fire station dog and some popcorn to watch television. Wait, what’s that alert? A fire has broken out somewhere in the city! Turn on the light and siren in the off-road vehicle to clear the road, while your partner launches the drone to scout out the fire from above. Will you make it in time? It's another exciting day for the LEGO® City Fire crew!

Protect the citizens of LEGO® City with the action-packed 60215 Fire Station, featuring a 3-level fire station with office, relaxation room and scout tower, small waterside dock and a separate garage with large opening front door and a landing pad for the detachable scouting drone with spinning rotors and camera. This cool set also features a fire off-road vehicle with a stud-shooting fire hose and new-for-January-2019 working light and sound brick, plus a water scooter, 4 minifigures and a fire station dog figure.

• Includes 4 LEGO® City minifigures: a fire chief and 3 firefighters, plus a fire dog figure. • Features a 3-level fire station with office, relaxation room and scout tower, small waterside dock and a separate garage with large opening front door and a landing pad for the included buildable drone. Also includes a small build with a trash can, newspaper stack and buildable flame elements. • This cool set also features a fire department off-road vehicle with new-for-January-2019 working light and sound brick, working fire hose with lever and storage compartments, plus a water scooter with space for a stud-shooting fire extinguisher and a scouting drone with spinning rotors and a rotating camera. • Accessory elements include a stud shooting fire extinguisher, 6 water elements, bucket, telephone, television, popcorn and a remote-control element for the drone. • Spin the rotors to launch the drone and rotate the camera to search for fires. • Press the light and sound brick on the off-road vehicle to clear the way as you speed to the fire. • Load a water element into the fire hose and extinguisher and push the levers to shoot them at the fire and ‘put’ them out. • Fire station garage is compatible with fire vehicles from other LEGO® City Fire sets. • This creative building toy set includes over 500 pieces. • Fire station measures over 11” (28cm) high, 8” (21cm) wide and 10” (27cm) deep. • Fire off-road vehicle measures over 2” (6cm) high, 4” (12cm) long and 1” (5cm) wide. • Water scooter measures over 2” (6cm) long and 1” (3cm) wide. • Scouting drone measures over 1” (3cm) high, 2” (7cm) long and 2” (7cm) wide."