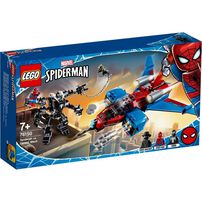 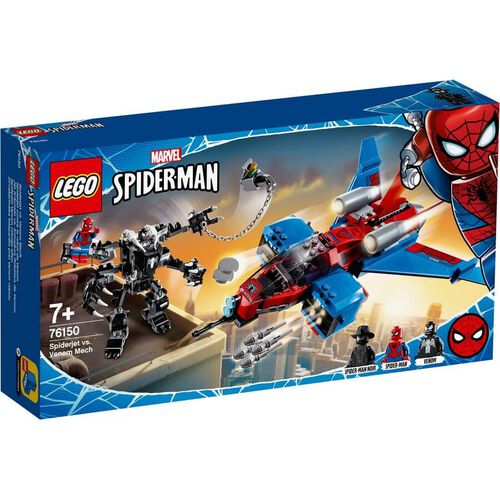 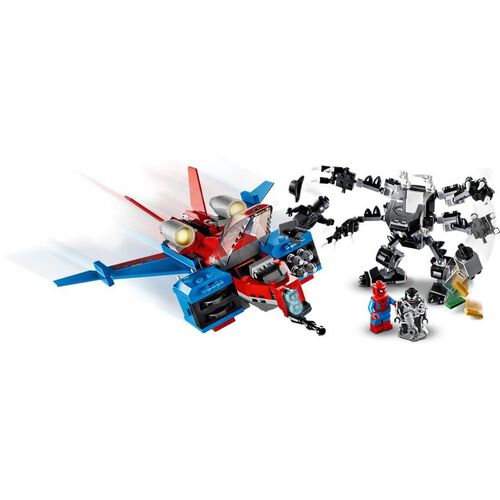 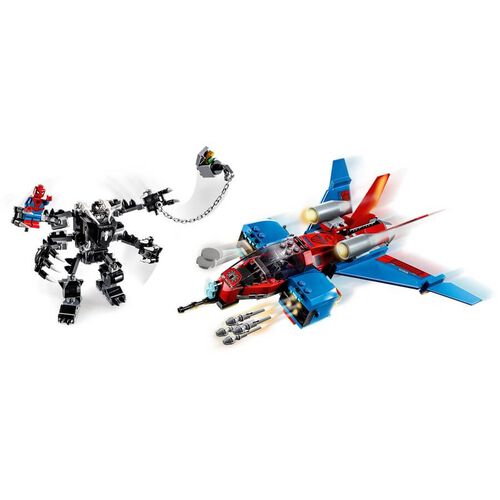 • This enormous Venom mech gives kids a giant-sized bad guy to defeat. When they put the minifigure inside the mech, the mega mechanical monster can go anywhere and grab at anything – including Spider-Man and jet planes!
• An oversized, 4-armed version of Venom gives the villain extraordinary powers. The new-for-January-2020 Spider-man Noir action minifigure takes him on with a jet plane armed with a disc shooter and flick missiles.
• The mech's cockpit opens for the Venom minifigure to enter. Kids position its arms and legs for action, then battle Spider-Man! Combine with other cool LEGO Spider-Man sets for extra play options.
• Boys and girls aged 7 and up will play out endless superhero adventures with this LEGO Marvel Spider-Man building toy. A hot action gift for kids who love Spider-Man playsets and LEGO minifigures.
• At over 4” (12cm) tall, this buildable mech toy inspires imaginative play on a big scale. Kids can integrate the playset with other LEGO superhero building toys for even more imaginative make-believe possibilities.
• This great gift for kids doesn’t need batteries. Kids can enjoy hands-on fun whenever they want. Battery-free LEGO mech toys encourage creative thinking, imaginative role-play and problem-solving skills.
• Looking for a Spider-Man playset for someone new to LEGO building toys? Not a problem! This Superhero Venom mech toy comes with an easy-to-follow guide to get kids building and playing without delay.
• LEGO Marvel Spider-Man playsets deliver imaginative group and solo superhero adventures for kids wanting to recreate movie scenes, dream up adventures of their own or simply use their Marvel building toy for display.
• LEGO toys meet the highest industry standards, so they are consistent, compatible and connect and pull apart easily (no superpowers needed!) – and it's been that way since 1958.
• As well as meeting the highest global safety and quality standards, The LEGO Group drops, squashes, twists, heats, bends, scratches and stretches LEGO bricks and pieces so you can be sure the toy is safe for your child.