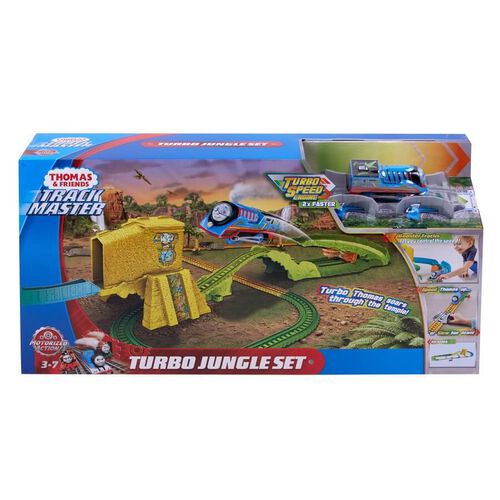 Inspired by the Thomas & Friends movie, Big World! Big Adventures!, the Turbo Jungle Set features a motorized Thomas train that can travel up to 2.5 times faster than normal TrackMaster engines. Plus, Turbo Thomas will complete an amazing stunt as he launches off the rails and soars through the air into a jungle temple! In the movie Big World! Big Adventures!, Thomas travels around the globe to discover new destinations. In South America, he journeys through the jungle, and this train set helps kids relive those thrilling moments. Not only does the set include a Thomas engine that can travel faster, it also comes with two Booster Tracks that let kids control the speed. Flip the switch on one Booster Track so the color turns green, and when Thomas passes over, he'll launch into Turbo mode. When a Booster Track is switched to yellow and Thomas passes over while in Turbo mode, he'll slow back down. Kids can experiment with different speeds as they send Thomas zipping around the big bank turntowards the grassy slope. Then he'll launch up a hill, off the tracks, and soar through the air into a temple! For even more ways to play, kids can also send Thomas down the hill below the temple and knock over the trackside palm trees.