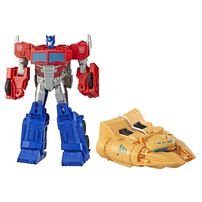 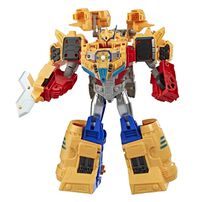 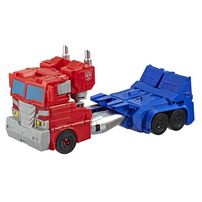 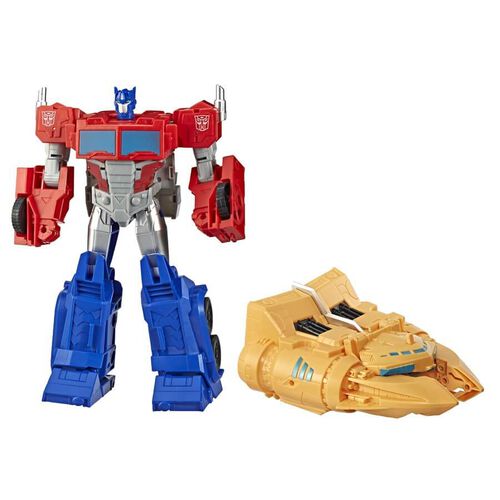 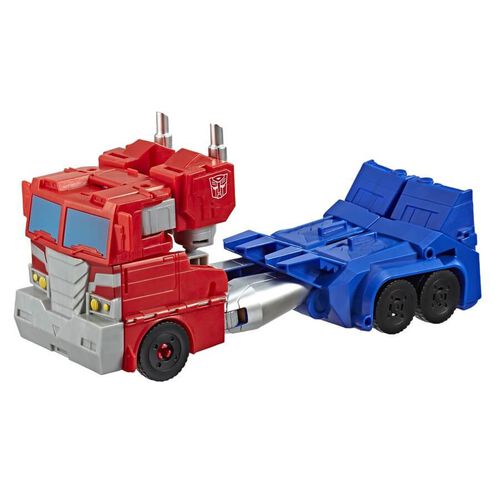 The race to find the Allspark is on between the heroic Autobots and evil Decepticons in the Cyberverse animated series! With the Allspark, both sides can harness incredible new powers, including the power to convert Earth vehicles into Spark Armour: battle-ready gear that allows them to fight in new places and in new ways. Bots with ground-based alt modes can use Spark Armour to take flight, while those who soar through the skies with flying alt modes are suddenly just as formidable on the ground. With the Allspark at play, see how its power will be used to defend Earth ... or threaten it. Optimus Prime harnesses the power of Allspark to convert the Autobot ship, the Ark, into powerful Spark Armour! Kids can collect other Spark Armor figures (each sold separately, subject to availability) to discover more exciting characters from the Cyberverse series - a great way to introduce kids and new fans to the exciting world of Transformers!
Combine, Convert, Power Up!
Spark Armour figures (each sold separately, subject to availability) include Spark Armour Earth vehicles that combine with the figure and convert it to its powered-up mode. Combine the included Ark Power vehicle with the Optimus Prime figure to convert him into his powered-up mode: Ark Power Optimus Prime.
Discover Other Spark Armour Power-ups!
Imagine recreating awesome Cyberverse battles with Battle and Elite Class Spark Armour figures that power up with the Spark Armour featured in the animated series (each sold separately, subject to availability)! Explore the incredible new powers of each character while bringing the epic adventures of Cyberverse to life.
Look for Battle and Elite Class Spark Armor figures (each sold separately, subject to availability) to discover more of your favourite Cyberverse characters!
Heroic Autobot Optimus Prime
Function: Noble Leader
When it comes to being an awesome leader, Optimus Prime has everything covered. Wise and always knows what to do? Check. Unstoppable strength? Check - in his chest, he carries the Matrix of Leadership, a legendary artefact that gives him increased power. Epic arch-rival? Check - his arch-rival is Megatron, who's the most powerful villain the universe has ever known. Noble spark? You'd better believe it. Optimus Prime and the Autobots will protect the people of Earth whenever they are threatened. Cool catchphrase? He's got one of those, too: Autobots, Roll Out!
Product Features
12-Inch Optimus Prime Figure: The Ark Power Optimus Prime figure is an impressive 12 inches tall. Power Up Optimus Prime With Ark Power: Combine, convert and power up! Combine the included Ark Power vehicle with Optimus Prime to convert him into his powered-up mode: Ark Power Optimus Prime. 3-In-1 Converting Toy: Easy Transformers conversion for kids from age 6 years! Convert Optimus Prime toy from truck to robot mode in 11 steps, then combine with his Ark Power vehicle to armour up figure. Makes a great gift for kids! Transformers Cyberverse Character: Classic red-and-blue Optimus Prime toy robot inspired by the legendary Autobot leader from the Transformers Cyberverse cartoon, as seen on Cartoon Network and YouTube. Inspired By Cartoon Network Show: In the G1-inspired Cyberverse series, giant Transformers robots from the planet Cybertron engage in epic battles, harnessing the power of the Allspark to create Spark Armour! Kids can imagine unleashing this new ability with this Spark Armour figure!Ages 6 and up
Includes
Cyberverse Spark Armour Ark Power Optimus Prime figure Ark Power Spark Armour Instructions